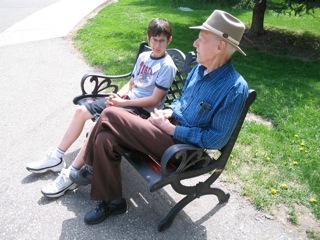 For a long time, I’ve regretted the fact that there seem to be so few opportunities in our North American society these days for multigenerational friendships and shared times with people from other age groups. Even weddings are sometimes “no kids please” and that was one of the few places where we could be sure that generations would mingle.

So, it was with great joy that I learned about Canada’s own i2i (eye to eye) Intergenerational Society, the brainchild of Sharon MacKenzie, a teacher and activist who has made it her mission to create opportunities for young and old and middle aged to come together and learn from each other, form friendships and have fun too. 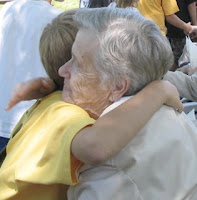 Hugs are great at any age! Photo by Sharon MacKenzie

Sharon has promoted the idea of Intergenerational Learning (IG) for many years, including setting up an “immersion” program known as the Meadows School Project, in Vernon, which offered classes to middle school students right within a retirement home for 8 weeks of the year….and daily opportunities to learn with seniors as buddies. That program is now being duplicated in Williams Lake in a new project they refer to as “Too Cool 4 School.” Graduates of the Meadows School Project, including both former students and elders, rave about the difference it made in their lives and in the lives of both young and old. A whole variety of intergenerational projects from across Canada, are listed at the i2i website, and will warm your heart, frankly, as you read about them. They’ve certainly moved me! 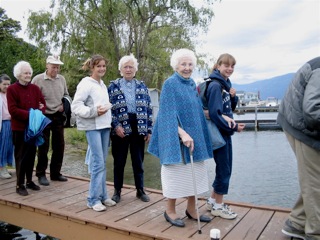 June 1, 2012 is Intergenerational Day, and June 15 is World Elder Abuse Awareness Day, an event that some of the i2i kids are helping to promote as they join the fight against elder abuse, another impressive side effect of the work of the i2i Society. This group does, and oversees, such good things… it’s worth checking it out and I hope you will.